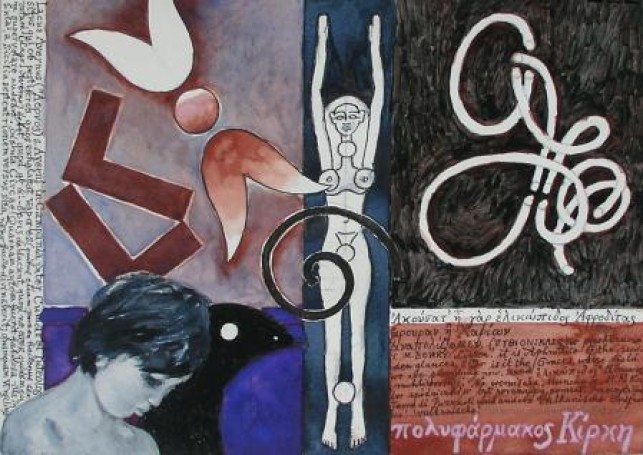 Born In 1930 in Warsaw, studied at the Academy of Fine Arts in Warsaw under the guidance of Kazimierz Tomorowicz. He practices painting, drawing, and is the author of extraordinary, unique books which are made solely by hand; he is also a poet. Since he left the Academy, he’s been engaged in numerous events of the artistic life, but after a short time of pursuits, decided to go his own way. He had been taking part in exhibitions and meetings which were crucial to the shape of polish art in the 50s and 60s. (3rd exhibition of modern art – Warsaw 1952; the Koszalin session – Osieki 1953) but he never identified with the avant-garde experience. He maintained the individual character of his works at all times. This is reflected in the original references to surrealism which in relation to polish and French art are very autonomous (during his stay in Paris in 1962 Makowski met André Breton and the members of the French group PHASES). Yet these are only allusions to the poetics not to the idea. Following the surrealists, he uses free associations, thereby making the composition seem loose, although in reality they are always well thought over. Otherwise his complex compilations couldn’t have had the great impact of condensed meanings; this asset of his painting – with the visual beauty and a tremendous load of lyricism – seems supreme. In his compositions, Makowski integrates multiple ciphers, letters of different kinds, various and usually complicated geometrical forms, simplified signs of objects (e.g. key – WHITE FLAME, 1971; ladder – SECOND BALCONY, 1972; flame – triptych A GIORDANO BRUNO, 1976), figurative accents (animal forms, images of women) or symbols known only to himself. Makowski takes an interest in many fields of science (one of them being mathematics) he is connoisseur of many cultures. European and Asian, a graceful reader of poetry, philosophical and esoteric periodicals (concerning the kabbalistic tradition and magical phenomena) but most of all he is a great admirer of art and a music lover. Experiences which arise from his contemplation of the paintings of ancient masters and literature, he transcribes to a dense, ‘polyphonic’ or – as he himself puts it – ‘permutational’ structure of his paintings and books, intertwining visual and poetic (multilingual) quotations with his private iconography. The encoded visual and verbal “tractates” that emerge from this process, incorporate elements of art theory, quotes from “useful books” yet at the same time they are a sort of an artistic diary. They reveal the author’s fascinations and at the same time camouflage them well. They provoke you to take an individual journey in this artistic jungle of multiple meanings. Discovering them, requires particular effort of one’s memory and imagination. For those unfamiliar with his work, the paintings seem to be coded shorthand messages, labyrinths with no exit, insoluble word puzzles. They won’t find any clues in the titles of compositions which are just as mysterious as the paintings, yet there are visual values to be admired, particularly the mathematically-musical composition, which creates an order by setting a distinct rhythm (Makowski often divides his paintings into regular parts, autonomous squares, which play equally important roles in the whole of the composition). The precision of lines is captivating, endearing with the sophisticated choice of colors (which are just as striking when used in narrow chromatic scales, even in monochromatic compositions). All these characteristics combine to create an unusual aura that emanates from Makowski’s works. In 1991, Makowski’s embellished composition MIRABILITAS SECUNDUM DIVERSOS MODOS EXIRE PROTEST A REBUS (1973-80) was presented by the polish government to the UN headquarters in Geneva. The painter was twice honored with the most prestigious awards in the artistic society: The Cyprian Kamil Norwid Art Critic Award (1973) and the Jan Cybis Award. In the most recent years Makowski established cooperation with the Zderzak Gallery in Krakow, where his unique books are published. (TABULA ITINERARIA, 2000)
Ask
Your message has been sent. Thank you!
An error occured. Please try again.