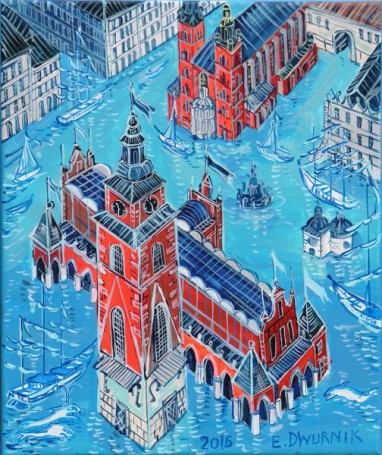 Born on April 19, 1943 in Radzymin, resides in Warsaw. Dwurnik studied painting at the Academy of Fine Arts in Warsaw between 1963 and 1970. In 1965, impressed by an exhibition of works by primitivist artist Nikifor seen during a vacation, he assumed a similar style of depiction. He began drawing and then painting in 1966, initiating work on a series titled PODROZE AUTOSTOPEM / HITCHHIKING TRIPS - the oldest and largest in the artist's oeuvre, and one that he continues to expand to this day. These are contemporary townscapes, usually painted from a bird's-eye view and highly detailed. Their subject is not topography; rather, their essence is an accumulation of motifs that together constitute the "portraits" of cities. Another large series, painted by Dwurnik in the years 1972-1974 (and expanded repeatedly in 1982-1987, 1990-1992, and 1997-2000) are his SPORTOWCY / SPORTSMEN. In these images the artist portrayed common character types and everyday situations, doing so in a merciless way although not without a sense of humor. His attitude to the "average Pole" changed in his next series titled ROBOTNICY / WORKERS - begun in 1975 and expanded between 1980 and 1991. In the 1980s Dwurnik's paintings became expressive and dramatic. Works created during this decade and, in particular, his monumental compositions from the OBRAZY DUZE / LARGE PAINTINGS series (begun in 1973 and continued to this day) often carried a political message and always, in some way, related to contemporary issues and realities. The series DROGA NA WSCHOD / THE ROAD TO EAST (1989-1991) was an homage to the victims of Stalinist terror, while the OD GRUDNIA DO CZERWCA / FROM DECEMBER TO JUNE series (1990-1994) did the same for the victims of Martial Law in Poland. The artist gained recognition for both the conceptual and purely pictorial values of these works, and as is often the case these were more appreciated outside of Poland than they were in the country, as evidenced in his receipt of the prestigious Coutts & Co Foundation Award in Zurich (1992). In the 1990s Dwurnik produced series that were continuations of his earlier HITCHHIKING TRIPS. These included BLEKITNE MIASTA / BLUE CITIES (from 1993) and DIAGONALE / DIAGONALS (from 1996) as well as compositions in a new style, like his seascapes from the BLEKITNE / BLUE series (1992-1993), the WYLICZANKA / COUNTING series (1996-1999), or his abstract paintings from the DWUDZIESTY PIATY / TWENTY-FIFTH series (begun midway through the year 2000). Apart from paintings, the artist also produces drawings, collages, prints (lithographs, metal plate techniques, xerographs, stamps) and graphic designs (illustrations, posters for his own solo exhibitions).
Ask
Your message has been sent. Thank you!
An error occured. Please try again.