The Galery of Graphic and Poster has an honour to invite you to an exhibition “Small, Smaller and the Smallest Graphics” which includes works of a well-known couple of Cracovian artists – Anna Sobol-Wejman and Stanisław Wejman.

Between 8th of December 2014 and 6th of January 2015 you will be able to see an unique collection of graphic miniatures.

Jan Fejkiel describes Anna Sobol-Wejman’s creativity as “the attempt of abstraction or rather bringing the surrounding reality down to the sign which doesn’t mean the artist’s resignation of figurative forms”. Anna’s works are about memory, passing time, evanescence of moments and chances.
Bożena Fortuna-Skibińska writes: “Stanisław Wejman, the brilliant teaser, shows us that small is beautiful, that small can be great – it’s only the question of imagination”. Marta Anna Raczek-Karcz claims that in his works “the title becomes an invitation for the viewer to interact; it is an introduction to a conversation and an expression of respect for whoever looks at the work”.
Jan Bujanowski compares their output as follows – Stanisław’s graphics as “having strong spatial construction, strongly phrased narration, a formal argumentation in each part of the composition” and Anna “has opposed almost childish pictograms, lapidary signs including deep associations, and elliptial speech, opened for the mutitude of interpretation”. 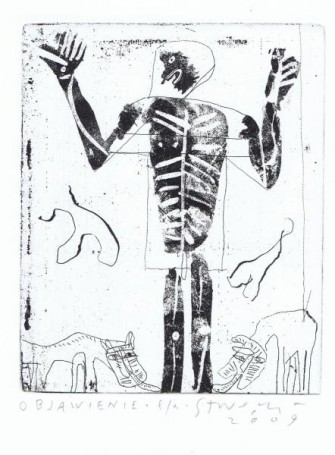 Born in 1944. Studied graphics at the Academy of Fine Arts in Cracow. Academic teacher, professor at Cracow Academy, also in USA and Kanada, drawer, painter, graphic artist. His favourite techniques are: etching, aquatint, litography. He organized graphics workshops in Maastricht Antwerpia, Urbino in Italy.
Ask
Your message has been sent. Thank you!
An error occured. Please try again.