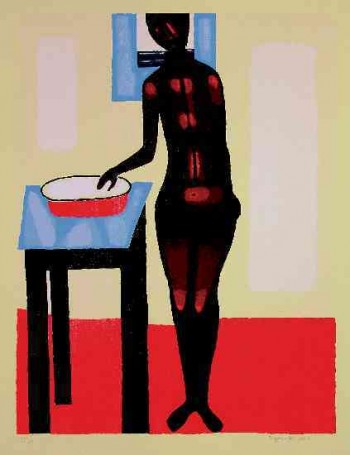 Lived in the years 1923-2011 in Cracow, Jerzy Nowosielski remains one of the most outstanding polish painters of the XX century. Draftsman and stage designer, art theorist, philosopher and theologist. He had started his studies at the time of nazi occupation in Kunstegewerbe-schule, and then continued at the Faculty of Painting at the Academy of Fine Arts in Cracow, from 1945 until 1947. In the years 1945-1949, he was a member of the Young Artists Group. Since 1957 a member and founder of the Cracow Group Artistic association. In the years 1957-1962 he taught at the Academy of Fine Arts ( a that time: WSSP) in Lodz and beginning 1962 at the Academy of Fine Arts in Cracow, where he became professor in 1976. He participated in about a hundred individual exhibitions and over two hundred and fifty group exhibitions home and abroad. He has been representing polish art, in the most prestigious expositions around the world. He created many mural polychromes in sacral buildings and churches in Bialy Bór. He also received many state awards and prestigious distinctions imparted by the artistic society. In 1998 he as a first painter he was został odznaczony Krzyżem Wielkim Orderu Odrodzenia Polski. His works are in all significant museum collections of contemporary art in Poland and many private collections around the world. In 1996 Zofia Nowosielska and Jerzy Nowosielski have brought into being the Nowosielski Foundation. Its aim is to support notable achievements of polish artists, by granting scholarships and yearly awards. In 1999 the State Council of Cracow City honoured Jerzy Nowosielski with a silver "Cracoviae Merenti" medal, for his noteworthy merits for Cracow. The same year, The Board of the Cracow District of the Polish Artists Association rewards Jerzy Nowosielski with the Witlod Wojtkiewicz Award for the exhibition of small abstract compositions painted on wooden boards, organized by the Starmach Gallery. The style of Jerzy Nowosielski is absolutely autonomous and very distinct from modern art. The phenomenon of his painting doesn’t fit into any frame or genre. Jerzy Nowosielski, being an active participant of the post-war battles over the vision of the new art, the co-founder of one of the most outstanding avant-garde art associations, is also creatively developing the long lived tradition of iconography, declaring an unusual faith in the salvatory power of painting. In his creation, the surrealistic need for marvel and the longing for the unimaginable that resembles Malewicz’s abstraction, blend with the East Christian view of the painting as an epiphany. All these features come together to create a picture strongly marked with a stigma of this unique personality. The religious themes coexist with portrait, female acts, landscapes and each of those depictions is equally important, because every one of them allows for an “icon” to emerge and so each may serve the artist’s only praiseworthy goal – the arduous liberation of light (spirit) from Darkness’s (matter’s) supremacy.
Ask
Your message has been sent. Thank you!
An error occured. Please try again.