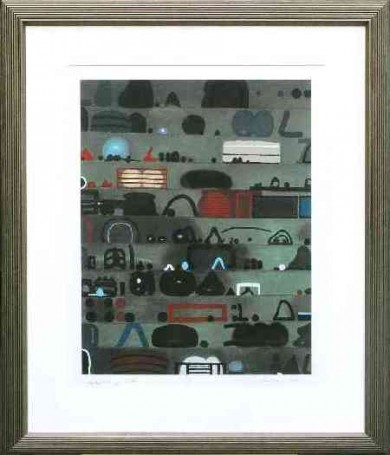 Jan Tarasin studied painting at the Academy of Fine Art in Cracow under the guidance of professor Zbigniew Pronaszka in 1946-1951. As a student he made his debut at the 1st Exhibition of Contemporary Art in Cracow in 1948/49. In the mid 50’s he created a series of lithographs : “Nowa Huta and its inhabitants” 1954, “The House” 1955. With the first creation he rebelled against the official optimism; in the latter, manipulating with still life symbolism, he enclosed existential themes that referred to the recent drama of war. After 1956 he began to paint non – figurative compositions. Sets of distinct elements (described as ‘objects’) were placed by the artist on a plane (the “interior” series 1957) or in allusive space (series: Feast 1957, Shore 1962-1964, Enumerated Objects since 1968, Antique Shop 1968) This principle ruled his painting for several years. The differences between various phases in his work, had to do with the ways of elaborating the ‘objects’ and their placement in space of the composition or against the background. Starting in the 70’s, the “objects” change into graphic, usually black signs on lucid backgrounds (cycle “Collection” since 1971) The backgrounds were sometimes spacious in an illusory way, varied in color, mellow. In the 90’s Jan Tarasin returned to the colorist way of depicting the signs and the backgrounds, which were many times dark and diffusing through the “objects” (Cycle “Hatchery of objects” 1992) Tarasin was member of “the Cracow Group”. In 1963-1967 he taught at the department of interior design at the Academy of Fine Arts in Cracow. In 1967 he transferred to Warsaw where in 1974 he undertook teaching at the department of painting at the Warsaw Academy of Fine Arts. In 1987-90 he was the rector of the Academy. In 1976 he received the Cyprian Kamil Norwid Art Critic Award, in 1984 The Jan Cybis Award and an award at the International Biennial in San Marino in 1965. Alongside painting, he practices drawing and artistic print – since the 60’s lithography and since 1974 serigraphy. In 1974-1981, eight of his “copybooks” containing his texts and serigraphs, were published. In 1995 he had an individual exhibition in the Zacheta Gallery accompanied by a monographic catalog. Jan Tarasin died in 2009.
Ask
Your message has been sent. Thank you!
An error occured. Please try again.