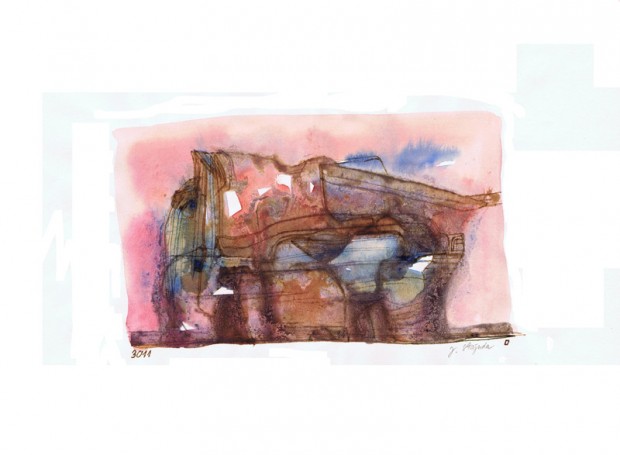 Born 01.01.1936 in Falenica, died 21 III 1992 in Warsaw. Jerzy Adam Stajuda studied architecture at the Warsaw Polytechnic and received his Master's Degree in 1959 in the studio of prof. Bohdan Lachert. As a painter, he made his debut in 1957 in an exhibition that took place at the department of architecture in Warsaw (the exhibition travelled to Gdansk the same year). Also in 1957, he made his debut as an art critic in the "Za i Przeciw" magazine. Starting then, he becomes very prolific, publishing in the "Przegląd Artystyczny", "Więź", "Nowa Kultura” „Ty i Ja" and "Współczesność" where starting in 1960 he had been writing a regular column. In the years 1962 - 1967 he is the chief editor of the art section in "Współczesność" and in 1967 - 1990 in the "Miesięcznik Literacki". His artistic interests develop simultaneously with his critical writing. Close relations with other artists will be of great importance in his artistic education, particularly his friendship with Artur Nacht - Samborski. With time, he develops his own style, independent from artistic fashions. He creates imaginative compositions, elaborate spatial structures on the verge of abstraction and figuration. In drawings and watercolors, he uses the technique of automatic drawing. Some of those watercolors become the grounds for other compositions, transferred with meticulous accuracy onto large scale canvases (in the 80's he will be using the epidiascope to achieve this). In parallel with his painting, he engages in music, playing the piano and fisharmony and studying scripts. He also establishes an independent studio of "the Chinese script morphology" and "the morphology of war vessels 1890-1950". He exhibits his works abroad, more often then in Poland, especially in the 80's, when his artistic style eventually matures, revealing itself in well defined, biological, spatial structure. The uniqueness of his art, numerous artistic friendships, the specific mode of life, the broad range of interests and intellectual passions and the autonomy of his opinions had made Jerzy Stajuda an important figure in Warsaw's cultural life and his apartment on Wiejska street had become a place to be. Since the mid 80's he's been lecturing at the sculpture department of the Academy of Fine Arts in Warsaw. In 1991 he received a prestigious award of the Alfred Jurzykowski Foundation in New York.
ADD TO CART Ask
Your message has been sent. Thank you!
An error occured. Please try again.