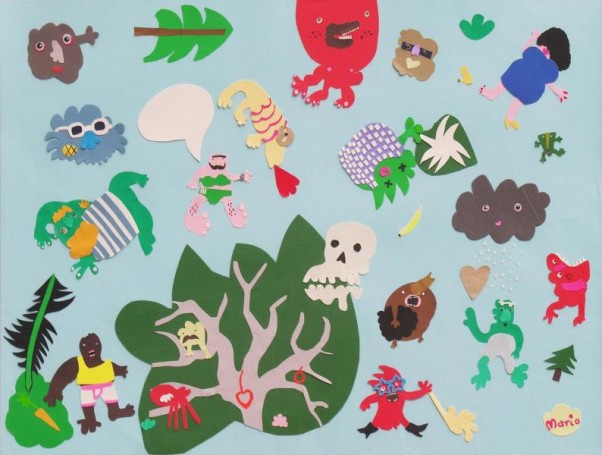 Mariusz Borkowski-"Mario" was born in 1981 in Poland. He grew up during the transformation when the country was transitioning from a grey-hued communist country to a colorful consumption oriented society.

Through this art, Mario creates a colorful world depicting, as in a false mirror, the world that surrounds him. He paints, make sculptures and composes stories full of fantastical creatures living in colorful rich dimensions.

The abundance of detail makes us discover new elements over and over again, changing the meaning of the admired piece of art.

This funny and colorful world is saturated with hidden irony.

The twenty first century is called an era of people that do not want to grow up. At the age of 32, Mario creates a fairytale world, a world for kidadults, and fun without end. That is one dimension of his artwork. He values classics and impeccable technique. In Mario’s opinion, art is about an idea but it is talent and an artist’s hard work that makes a piece of art valuable and polished.

Mario graduated from the Warsaw Academy of Fine Arts, the diploma was awarded by the Minister of Culture.
The artist worked on the cut-out portrait gallery of the Polish Intellectuals presented by Polish magazine Kulturalna Liberalna – http://kulturaliberalna.pl. His works has bee shown on collective exhibition „We and the rest of the world” in Nowy Targ, in Cafe Kulturalna in Warsaw, and in galleryUnit24 in London. In 2013 he had a solo exhibition in the Brzozowa Gallery in Warsaw.

ADD TO CART Ask
Your message has been sent. Thank you!
An error occured. Please try again.