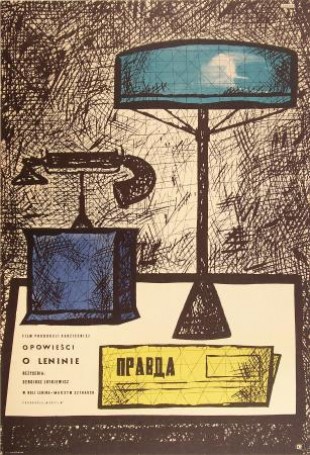 Author of posters, co-founder ofthe Polish school of poster, director of animated films, draughtsman, stage designer, and illustrator. Born on January 4, 1928 in Poznań, Poland. In 1947 studied the piano and then architecture at the Warsaw Polytechnic, graduating in 1952. From 1945 Lenica had satirical drawings published in the Polish press (e.g. "Szpilki", "Odrodzenie", and ”Świat" magazines). In 1950 he created his first posters for the cinema and the theatre. He illustrated books for children (e.g. J. Tuwim's poem "Locomotive" and B. Leśmian's "Sesame Tales" and other books, wrote essays, among others ones concerning the theory of the poster, worked as an exhibitor and stage designer in the theatre. He also designed small graphic forms, such as postage stamps. In 1957 he started to create animated films, initially in Poland and then in France, Germany and the USA. His films include, for instance, "House" (created in collaboration with Walerian Borowczyk; at the Grand Prix at the International Competition of Experimental Films in Brussels, 1958), "Labyrinth", "Monsieur Tête", "A", "Adam 2", and "Ubu Roi". In the period 1954-1956 he was assistant to Henryk Tomaszewski at the Warsaw Academy of Fine Arts. In 1974 he conducted lectures at Harvard University in Cambridge, USA. In 1979-1985 he was head of the department of animated film at the Kassel High School, Germany. In 1986-1994 he was professor at the Berlin High School of Arts, In 1963 he left Poland and settled in Paris. He had numerous one-man exhibitions, e.g. in Warsaw, Cracow, Poznań, Paris, Berlin, Munich, Hamburg, Vienna, London, Chicago, New York City, and Tokyo. For his achievements in the art of poster Jan Lenica received, among others, the Toulouse-Lautrec Award (1961), first prize at the First International Biennial of Posters in Warsaw (1966), the Jules Cheret Award (1983), the Jurzykowski Foundation Award, and an award in New York (1987). Lenica's films received many awards and recognitions at international festivals, e.g. in Annecy, Oberhausen, Venice, Melbourne, Brussels, Cracow, and Buenos Aires. For his overall achievement in film art he was presented with the prestigious Max Ernst Award (1966) and the Smok Smoków [Dragon of Dragons] Award in Cracow (1999). He twice received the Bundesfilmpreis, the highest film award gevin in Germany. In 1998, at the Studio of Film Miniatures, he started work on a feature movie with the use of trick camera work, entitled R.O. Island, which he was notable to finish. As of 1986 Lenica lived in Berlin, and where he died in 2001.
Niedostępne
Ask
Your message has been sent. Thank you!
An error occured. Please try again.