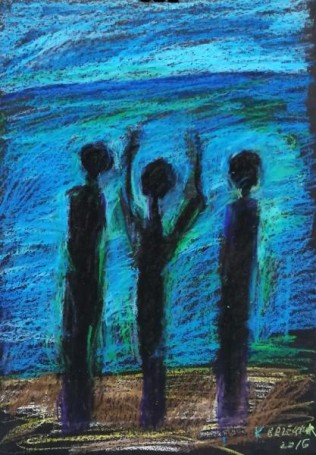 Christine Brzechwa‘s poetical world has always been one of fairy – tale and grotesque (…). Well, I thought I had entered a maze of corridors in a fairy – tale castle with dim portraits of royal ancestry hanging on walls. Just the same, all that: the fairy – tale, the castle and all those portraits – turned out to be a far cry from any childlike bliss, albeit they were so very childish, both in the creative fancy as well as in their artistic form (…). I found I had entered a castle of a powerful dynasty of fancy – dress Herodus and some village Halloween kids who carry their humble legend, their naive poetry and… their frost – bitten ears as they keep wandering through the cold and snow (…). Christine Brzechwa’s main theme in her art seems to be the sympathy she feels for the poverty – stricken, ugly city’s destitute districts, they sympathy that had developed particularly during the regal period, through her being so fond of the folk legend, of primitive poetry, which has surely reached its acme after having put on a cloak of love for all human misery, be it regal or else plebeian, all stemming from the philosophy of the human lot, with its final and inevitable destiny. "Two Theatres of Krystyna Brzechwa” by Stanisław Grochowiak Gallery of the Fine Art at the Polish Artist Union, Warsaw 1966 (…) At times we see a sun in her paintings, a dense red ball which radiates no light… where is the source of light in her works? Her objects cast no shadow, her silhouettes are not filled with inner light, so where is the shadowless lamp which illuminates all that? The world of surrealism is one of associations, but they are not arbitrary. I know that the translation of images into words must always be more or less arbitrary; regrettably, there is no other way. So where am I to locate that shadowless world? I locate right inside the red ominous sun, in the depths of its fire, in the inferno of Brzechwa’s world. It was the motionless, despondent phantasmagorias, brought to an eternal standstill, can serve their sentence of existence. There the face becomes motionless and the body turns into stone, while the phatasms of the mind dance and moon about. (…) There is a good deal of Breughel this Infernal’s or Hieronymus Bosch’s inspiration, but it is not the only source or the only thread. (…) Let us note that Brzechwa’s grotesque, naturalistic, sad or tormented figures act always separately, without entering into contact; they apparently do not see one another. Their Byzantine, large and motionless eyes look somewhere into remote space, into nothing, towards nothing. A bird– like creature caresses a woman’s leg but does not look at her at all. Thus what links the people and the strange creatures is the situation that they share, the existence that they have in common, but nothing else. (…) Brzechwa has created her own, well– defined style, large format paintings, vast spaces of saturated colour, a particular kind of grotesque, frequent biblical motifs. (…) But grotesque is the wrong word. It is surrealism. Piotr Kuncewicz The Contemporary Art Gallery ”Nowy Świat”, Warsaw 1981
ADD TO CART Ask
Your message has been sent. Thank you!
An error occured. Please try again.