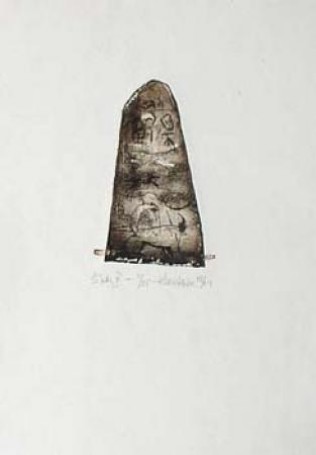 She was born in 1956 in Katowice, Poland. After graduating from English Philology at Silesian University in 1979 she studied art. In 1984 she completed her artistic education as a graphic artist. Korusiewicz prefers metal techniques – etching, aquatint and dry point although she is also known for her remarkable drawings, mainly portraits. Using the motives from old Italian masters the artist tries to show the destructive effects of the passing time; to define mysterious features which make every ancient piece of art so fascinating. Since 1981 she has held numerous one-person shows and has participated in many group-shows and competitions. She does illustrations for books, magazines and newspapers. The artist established herself as a poet. Her book “Women’s Word of Down” was awarded The National Literary Fund prize for the year 1987. In 1988 she represented Poland during Polish Realities Festival in Glasgow, Scotland. She was granted a literary scholarship of Polish Ministry of Culture for the year 1989. In 1991 her second book “The Secret of Correspondence” was published. Maria Korusiewicz is also a well-know poetry translator (works of Sylvia Plath, Anne Sexton, Christy Brown etc.) and a journalist.
ADD TO CART Ask
Your message has been sent. Thank you!
An error occured. Please try again.