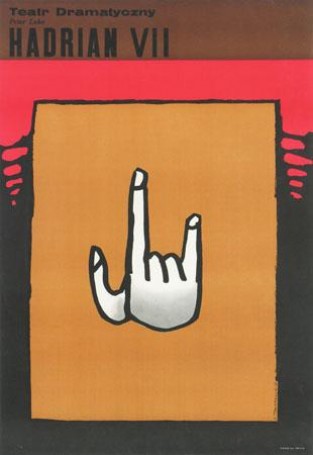 He was one of the most important and popular artists from the Polish Poster School group. In 1914 he was born in Warsaw and from 1934 to 39 he studied painting at the Academy of Fine Arts in Warsaw. In 1939 he won first award for designing the Polish Industry Pavilion in New York - World’s Fair and in 1948 five gold medals on the International Poster Exhibition in Vienna. From1952 to 85 he had been a Professor at the Academy of Fine Arts in Warsaw.
1953: State Award 2nd degree,
1958: 1st award of the RM president for compositions for youth and children.
1963: 1st award at the 7 Biennial in Sao Paulo, Brazil. 1965: Gold medal, Leipzig.
1970: Gold medal at the International Poster Biennial in Warsaw.
1976: received title: "Honor Royal Designer for Industry" from the Royal Society of Arts, London.
1979: 1st award at the 3rd Poster Biennial in Lahti, Finland.
1981: 1st award on the International Poster Exhibition in Colorado, USA. 1984: Award of the Alfred Jurzykowski Foundation in New York.
1986: Special award ICOGRADA.
1988: Gold and silver medal at the International Poster Biennial in Warsaw.
1991: Bronze medal at the International Poster Triennial in Toyama, Japan.
1994: Silver medal at the 4th International Poster Triennial in Toyama, Japan. His works are in the collections of: the National Museum in Warsaw and Poznan, Museum of Contemporary Art in Sâo Paulo - Brasil, Museum of Modern Art New York - USA, Villa Hugel-Essen - Germany, Museum of Modern Art in Kanagawa - Japan, Stedelijk Museum in Amsterdam - Holland, Colorado State University - USA, Museum of Modern Art - Toyama-Japan
He was known for the simple but creative and sublime expression with a sophisticated doze of sense of humor. In his works were many understatements making the oberver wonder of its essence and general meaning.
He died in Warsaw in 2005.
ADD TO CART Ask
Your message has been sent. Thank you!
An error occured. Please try again.