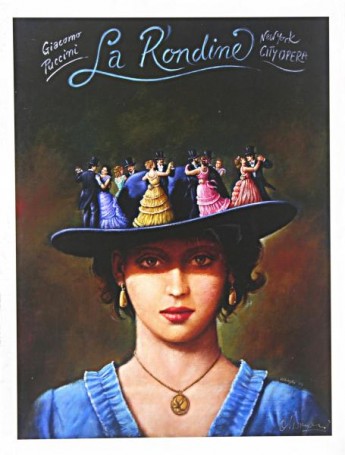 Was born in Kielce. In 1969 he graduated from the Architectural Department of Warsaw Politechnical School. After having immigrated to the United States in 1981, he soon established himself as a prominent illustrator as well as a painter. Since 1985 he has been teaching at the prestigious School of Visual Arts in New York. Since then his works have regularly appeared in major publications such as 'Newsweek', 'Time', 'Business Week', 'Atlantic Monthly', 'Playboy', 'Omni', 'The New York Times', 'New Yorker', and 'Der Spiegel'. The list of his major corporate accounts includes among others: US Trust Bank, 31 Corporation (England), Smith Kline Beecham International, American Airlines and the New York City Opera. In 1996 he was commissioned by the US Information Agency to design a poster celebrating 25 Earth Day Anniversary. Rafal Olbiński received more than 100 awards for his paintings and illustrations which include gold medals from the prestigious Society of Illustrators and the Art Directors Club of New York. In 1994 he won the International Oscar for the Worlds Most Memorable Poster, Prix Savignac 1994 in Paris. In the same year he received a Creative Review Award for the Best of British Illustration in London. In 1995 his poster was chosen as the official New York City Capital of the World poster by a jury led by Rudolf Giuliani. In 1996 he won the Stevan Dohanos Award as the Best in Show in The Society of Illustrators Members annual exhibition. In 1997 the Spectrum (International Competition for Fantastic Art) jury awarded his New York City Opera poster for Falstaff the Gold Award in Advertising Category. His paintings have been acquired by many important art collections, including the Library of Congress Print Collection in Washington, Carnegie Foundation in New York, Republic New York Corporation, Searle Corporation, Bowne & Co., Holiday Inn International, as well as numerous private collections in the United States, Japan, Australia, and throughout Europe. His artistic profile has been featured in international magazines such as Print Magazine #3/1982 (New York), Novum Magazine #12/1983 and #11/1990 (Munich), Graphis Magazine #230/1984 (Zurich), Communication World Magazine #5/1987 (San Francisco), Idea Magazine #31/1988 and #2/1994 (Tokyo), Art Magazine in America #12/1991 (New York), Communication Art #2/1993 – cover story (Palo Alto), The World & Magazine #7/1995—cover story (Washington B.C.), High Quality Magazine #11 (Munich), Univers des Arts #2/1996 (Paris), How Magazine #12/1997 (Cincinnati), etc.
Niedostępne
Ask
Your message has been sent. Thank you!
An error occured. Please try again.