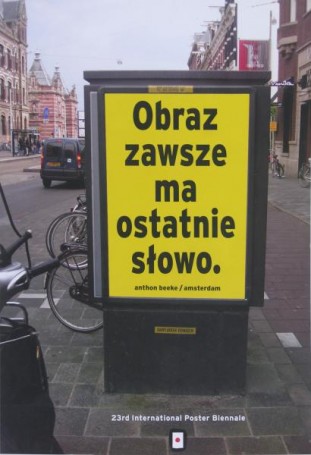 Anthon Beeke was born in Amsterdam, Netherlands in 1940. Apart from a few months of evening classes at the school of applied arts, he received no formal design training. After working as an apprentice for a number of overseas designers, he spent an important formative year as an assistant to Jan van Toorn. In 1963, Beeke established his own graphic design practice, working mainly for literary publishers, museums, cultural magazines and theatre companies. His independent career was interrupted from 1976 to 1982, when he was assistant director of Total Design; until the foundation of his own Studio Anthon Beeke in 1987 he occasionally worked with Dutch designer Swip Stolk. Beeke’s designs have always generated controversy, from his 1969 alphabet composed entirely of naked women, to his notorious 1980 poster for Shakespeare’s Troilus and Cressida – intended, the designer claims, as a feminist statement. Beeke now employs a staff of eight in his Amsterdam office. He has been awarded innumerable prizes for posters, books, magazines and calendars. His clients include the Stedelijk Museum, Toneelgroep, the newspaper publisher Perscombinatie and book publisher Prometheus. He is currently involved in the international trend-forecasting magazine View on Colour.
Niedostępne
Ask
Your message has been sent. Thank you!
An error occured. Please try again.