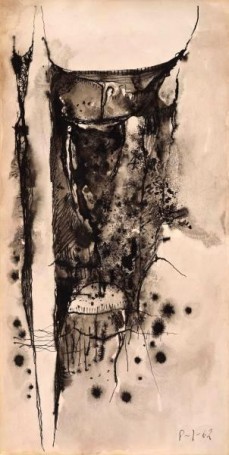 He was born in 1930 in Radom. At the Academy of Fine Arts in Warsaw he studied under the direction of Artur Nacht-Samborski. Ziemski debuted at The National Exhibition of Young Visual Art "Against War - Against Fascism" at the Warsaw Arsenal in 1955. From 1958 he led his own painting studio at the Academy of Fine Arts. During this period he joined an art group centred around Marian Bogusz and his "Krzywe Koło" Gallery. His early works are close to figurative art, Ziemski’s field of inspiration were world of nature, like Sun or birds. Artist’s style changed quickly, the composition became less dense, he made pools of paint and distributed it carelessly. Ziemski's work was ultimately influenced by Nacht-Samborski, but inspiration also came from trends dominating the 1950s. He becoming one of the most resolute representatives of that genre – informel. He used color with ease (but gave strong colours up later), he mixed different structures. His paintings turned into inner landscapes, reflections of dreams and imaginings, personal emotions, anxiety. Varied elements became part of Ziemski's paintings at the end of the 1960s: strong broad lines were contrasted with the familiar openwork, web-like relief structures. They were the harbingers of his path toward in-depth studies of Oriental calligraphy. Another characteristic feature of these paintings is a clash of the strong, monumental hieroglyphic sign with a delicate pigment.
Ziemski's works have been shown in many solo and group exhibitions: in Poland, but also in Washington, Chicago, Brussels or Vienna. In 1979 Ziemski was given the Jan Cybis Award. He died in 2005 in Warsaw.
ADD TO CART Ask
Your message has been sent. Thank you!
An error occured. Please try again.