Untiteld, Cover of an album about the work of Andrzej Dudziński, mixed media on paper, 101x86cm, Price: 5500 PLN 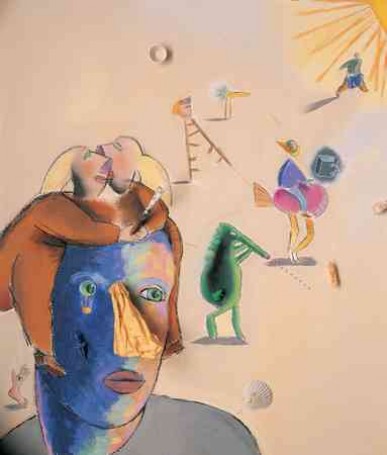 Andrzej Dudziński was born in 1945 in Sopot. He studied architecture at Gdansk University of Technology in 1966 - 1968 and following that, interior architecture and graphic design at the State College of Fine Arts in Gdansk. He has completed his studies at the Academy of Fine Arts in Warsaw at the Graphic Design Faculty, under the guidance of Henryk Tomaszewski. As a student, he published his drawings in the monthly magazine 'Polska' and in 'Szpilki' and 'Kultura'. Since 1970 through 1972 he had been living in London where he worked for the underground magazines: 'OZ', 'Ink', 'Frendz' and 'Time Out'. After his return to Poland he quickly made himself known, thanks to the bird Dudi which appeared every week in 'Szpilki'. He had been working with 'Literatura', 'Kulisy' and 'Polityka' on a regular basis, designing posters for cinema and theatre productions. He wrote children’s books (together with his wife) and illustrated them, created stage designs and film intros, cooperated with radio stations and television. In 1977 he was invited to the International Design Conference in Aspen, Colorado. He decided to prolong his stay and settled in New York. He worked for American top magazines, such as: 'The Atlantic Monthly', 'The Boston Globe', 'Newsweek', 'The New York Times', 'Playboy', 'Rolling Stone', 'Vanity Fair', 'The Washington Post', 'Time'. At the same time, he publicized in many European periodicals. He was the author of numerous commercial projects for AT&T, Conde Nast, IBM, Deutche Telekom and The Royal Bank of Scotland. From 1982 until 1990 he taught at The Parsons School of Design in New York. He specializes in painting, drawing, newspaper graphics and photography.
ADD TO CART Ask
Your message has been sent. Thank you!
An error occured. Please try again.